Many of us feel a need to mark the turning of the year in some way other than simply customary overindulgence on the eve of the old year – an outing to some favoured spot on New Year’s Day perhaps? For those of us who live in Norwich, the North Norfolk coast usually fits the bill. It is not just a matter of blowing cobwebs away or walking off the previous night’s hangover, although certainly that may be an element of it, but more a way of welcoming the New Year and bidding farewell to the cultural interregnum that is the week after Christmas. The last week in December may not strictly be a month of Sundays but it can sometimes feel like it.

Christmas and New Year have long been syncretised with ancient rituals that used to mark the winter solstice, the turning point of the year that heralds the long-awaited lengthening of days. The trouble is these days, as with any public holiday, the Christmas break (should that be ©hristmas?) is largely seen as just another retail opportunity to sell you stuff you really don’t need. New Year’s Day seems different though – especially now that the ‘January sales’ tend to begin on Boxing Day – and has the feel of a day with a tad more community spirit than most. It may be cold January but, venturing outdoors, you get the impression that families are more likely to go out for a walk together on this day than any other in the year. Naturally enough, this phenomenon may also have some connection with New Year resolutions that involve fitness, family togetherness and fresh resolve to avoid couch potato blight. Personal New Year favourites tend to be a walk along the shingle bank at Cley-next-the-Sea, a five-mile circuit centred on Horsey that takes in Horsey Mere and a seal-friendly stretch of the northeast Norfolk coast, or the cliff walk between Overstrand and Cromer. This year, we chose the latter: a seaside amble along the beach from Cromer to Overstrand then a return to Cromer by way of the cliff path.

On a dull winter’s day the north Norfolk seascape can appear almost monochromatic. It is necessary to make adjustments in order to fully appreciate its understated, charcoal-sketch beauty. Scandinavians, fully at home with cold northern light, are good at this; Brits, however, our eyes forever enviously half-cocked on the promise of Mediterranean sun, are not so adept. Whatever the time of year, the north Norfolk coast is a liminal landscape: just sea, sky and sand. Head due north from here and there’s nothing but cold dark water until you reach the Arctic pack ice – nothing but notional maritime territories: Humber, Dogger, Forties, Viking. Horizontal layers of grey stratify the landscape: murky water; shining banks of cloud that weigh heavy on the horizon; sand and pebbles in the foreground. Look behind you and the cliffs behind are crumbling: too soft to win the fight in any sea versus land standoff. The aural landscape is hardly brighter: just the usual coastal din of argumentative gulls and overexcited dogs, the swash of waves and the grate of pebbles.

Crunching east along the pebbles, keeping a casual eyen open for the ochre glint of amber (never found), a steely blue jewel  nestled in seaweed reveals itself. The object, a detached lobster tail – or, rather, thorax – is so intensely blue that it seems to suck in light like a tiny dead star fallen to earth. The cerulean richness seems unworldly in this colour-bleached landscape. Separated from carapace and succulent flesh, its isolation renders it all the more precious. Precision-engineered to allow the most delicate of movements, it is a tail designed for swimming, dancing and mating displays, a tail for lobster love.

Returning along the cliffs next to the golf course the path is lined with thickets of sea buckthorn. In other years these have been so weighed down with squishy orange fruit that they dazzle the eye but this winter the berries, following a savagely cold December, are little more than a withered memory, with few to be seen on the bushes, thinned by frost action and hungry birds. Archaeological evidence suggests that sea buckthorn berries once played an important role in man’s diet but the truth is that, while they may be nutritious, they are also unbelievably astringent eaten raw, like bitter acid on the tongue. Freezing and cooking are supposed to reduce their unpalatable quality so we must conclude that Norfolk’s early settlers made some sort of jam out of the fruit. 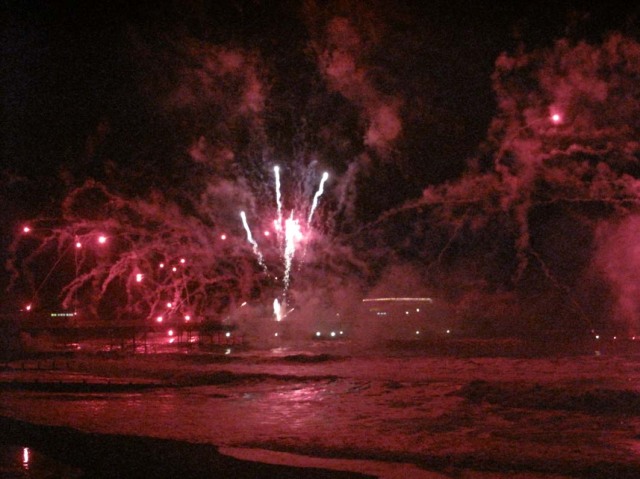 Since the millennial year, Cromer has staged a New Year firework display that is said to attract at least half the town’s population and the same again from the county beyond. This year, we stayed to watch. By well before the time that darkness fell, it was impossible to find a seat in the Rocket Cafe above the Lifeboat Museum – the perfect viewpoint for the event. Instead, we stood among the crowd by the seawall facing the pier, while others positioned themselves up the steps that lead up to the main promenade. The display, when it finally began after what seemed like a long, cold late-afternoon wait, was a wonderfully explosive affair – a lengthy and varied display that made the annual Lord Mayor’s Procession event in Norwich look like a damp squib in comparison. As the last cracks of pyrotechnic thunder echoed against the sea wall, and the final salvo of rockets stabbed at the sky, I wondered what Cromer’s offshore crabs made of all this unexplained cacophony. Were they all scurrying northwards along the seafloor heading for the relative peace of Dogger Bank?

Hidden places, secret histories and unsung geography from the east of England and beyond
View all posts by East of Elveden →
This entry was posted in Norfolk, Walking and tagged crabs, Cromer, lobsters, new year, Norfolk, North Sea, Norwich. Bookmark the permalink.