A couple of weeks ago I attended an event called A Taste of Serbia in London. The evening was arranged by the National Tourism Organisation of Serbia and we were all generously plied with tasty nibbles and a wide range of excellent wines from that country.

Of course, this being a press event the main emphasis was to promote all that Serbia has to offer British would-be travellers. To serve this purpose a promotional video was shown that featured a Belgrade DJ walking through the city’s streets whilst waxing lyrical about his hometown to chill-out music. The video showed a cool yet ecstatic crowd dancing in a Belgrade nightclub before cutting to our DJ hero walking through oddly unpeopled streets; then it swooped to Kalemegdan Park before cutting to the DJ encountering a dark-eyed beauty in an apparently deserted shopping mall. It told a story, certainly, but it seemed a strangely incomplete one. 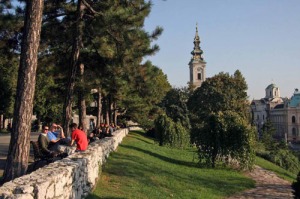 I recognised Belgrade alright but the video did little to flatter the Serbian capital. OK, it may not be Prague but the city does have a certain maverick charm that had been sorely overlooked. Maybe it was trying attract a young, ‘cutting edge’ crowd but the promotional film made the ‘White City’ look grey and drab — just like the stereotype.  As someone remarked as we watched it: ‘There’s nothing in this video that makes me want to go there.’ I had to agree. Where was Skadarlija – the so-called Bohemian quarter? Where were the floating splav cafes and restaurants on the river? Where were all the quirky cafes and wacky restaurants? Why was Kalemegdan Park, that wonderful spot above the confluence of the Danube and Sava rivers, so devoid of people? Where was the Zemun waterfront? Where was the Danube? Ada Ciganlija island? The list goes on. Why didn’t the film crew wait for a spot of sunshine to brighten things up? 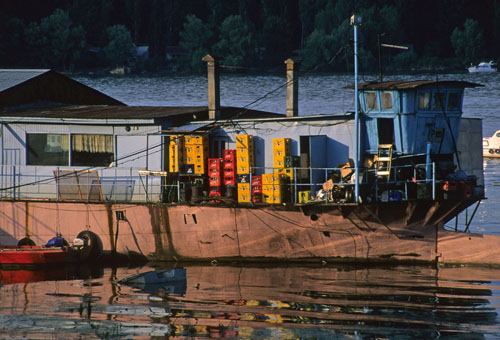 Anyway, Serbia has a lot more to it than just its capital city, wonderful as that may be. To me, it’s forested hills, hidden Orthodox monasteries, Roma men driving carts, cartoon-book haystacks in fields, old rusting Zastavas serving as corn stores, solitary men fishing in rivers, storks clattering  their bills on village roofs. It’s the smell of Turkish coffee, grilling meat, roasting peppers and lime blossom. It’s the taste of sljivovica (plum brandy) and kajmak (a sort of cream). It’s tall men and elegant women; sometimes even tall women and elegant men. It’s the sound of violins, accordians and shuffling feet.

Perhaps all these things that I hold dear are considered a bit too backward and Old Europe for the marketing people? Still, at least they noticed the dark-eyed beauties. They got that bit right.