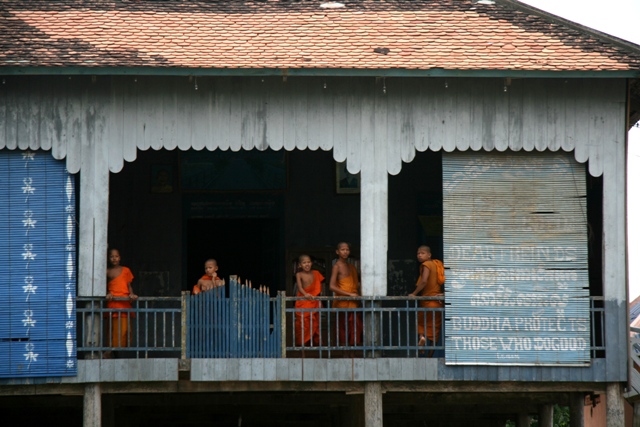 This post comes from somewhere firmly east of Elveden – from Southeast Asia or, more precisely, the deep south of Laos.

Last week was spent travelling along the Mekong River from Ho Chi Minh City, Vietnam north into Cambodia. Then, courtesy of Lao Air, a quick crossborder turboprop hop from Siem Reap to Pakse in southern Laos.

Angkor Wat near Siem Reap was, of course, astounding but the vast crowds and grey-skied humidity were debilitating and within a few hours I found myself to be in that state universally known as ‘templed-out’. Angkor Wat, Angkor Tom and the other religious sites around Siem Reap are by far the country’s biggest draw but elsewhere Cambodia is a poor and savagely scarred place. Quite understandably, almost everyone over the age of 40 seems to have a haunted look, although these survivors of the Khymer Rouge period will tell you that contemporary Cambodian youth simply doesn’t want to know about the horrors of the past. The dreaded Killing Fields just outside Phnom Penh and the city’s infamous S-21 prison are just as bad as you might imagine – even worse perhaps. The continuing tragedy is the fact that several erstwhile senior Khymer Rouge officials still hold high-ranking government posts. These are the ones that parade around Phnom Penh in black-windowed Lexus, eating at fancy air-conditioned restaurants while the vast majority of the population barely scrapes a living farming rice in the hinterland. 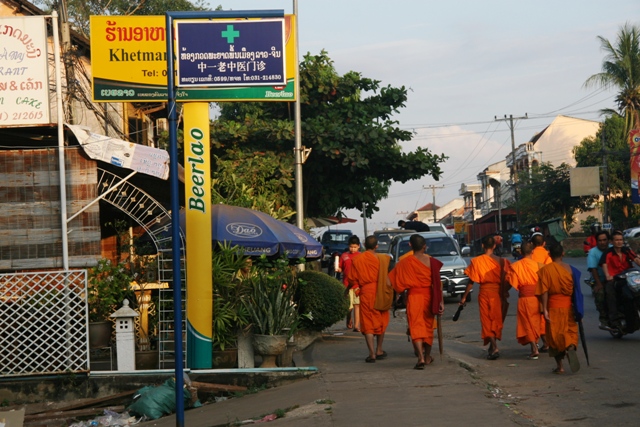 Laos – or rather the People’s Democratic Republic of Laos – feels different. Poor certainly, but seemingly a happier place despite its unenviable reputation as being, in per capita terms, the world’s most heavily bombed country of all time – this, during The Vietnam War (or, as they call it in Vietnam, ‘The American War’).

Stopping for a coffee this morning at a place that serves as an outlet for local organic coffee production there was no coffee to be had as the machine had just broken. So I drank tea instead and listened as a table of saffron-clad Buddhist monks start chanting as soon as they had finished their noodle soup. No-one reacted in the slightest: monks are everywhere here; an almost quotidian part of Laotian daily life. In Laos, the future may be orange, but so was the past. 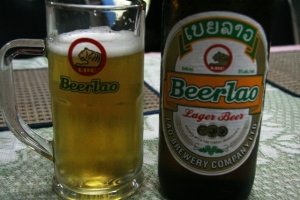 Another ubiquitous sight here is advertising for Beerlao, the nation’s favourite beer.  The beer – pretty tasty by the way – is sold everywhere in no-nonsense 640ml bottles. Everywhere, too, are the yellow signs that advertise the brew, as well as beer mats, table cloths, menu covers, waitresses’ aprons and café clocks. Its cheerful yellow and green logo is so widespread here in Laos that Beerlao appears to fill a semiotic niche even more comprehensively than Coca-Cola manages throughout much of the rest of the developing world. Unusually, signs advertising the familiar fizzy sweet are nowhere to be seen. 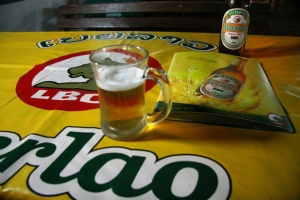 As above, so Beerlao.

Hidden places, secret histories and unsung geography from the east of England and beyond
View all posts by East of Elveden →
This entry was posted in Asia, History, Travel and tagged Beerlao, Buddhism, Cambodia, Khmer Rouge, Laos. Bookmark the permalink.