Ghosts of the Aral Sea 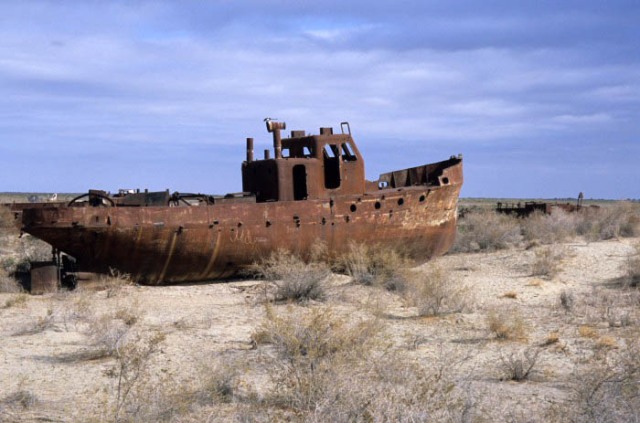 To continue from the earlier post about a hotel that thought itself a ship, here are some more landlocked boats. These, though, are real ones – the rusting remains of what was once a large fishing fleet on the Aral Sea in central Asia. The Aral Sea, which at one time was the world’s third largest inland sea, has shores in both Uzbekistan and Kazakhstan. Or rather it did have – it has now almost completely dried up (you might want to check it out on Google Earth).

It is a depressingly familiar story – large scale environmental damage thanks to government incompetence. In this case, the government was that of the Soviet Union, which diverted a vast volume of fresh water from the Aral Sea in order to grow huge expanses of cotton in Uzbekistan – a very thirsty crop in a very hot country. The fishing fleet used to catch several species of fish here, and much of the haul was transported an awful long way by train to the Baltic coast for canning. The main fishing port on the southern shore was Moynaq. Now the boats lie stranded just off the former shoreline. The water, such that remains – saturated with pollutants and virtually devoid of fish – lies hundreds of kilometres to the north.

Given mass employment, isolation, heavy metal pollution and an uncaring post-Soviet government in far off Tashkent, Moynaq is not a happy place.

I visited Moynaq by taxi from Nukus to the south. It was certainly the longest taxi ride I have ever taken – 220 kilometres each way – but even so I managed to bargain a return fare of just $60 (petrol is cheap in Uzbekistan, so is time). The road was surprisingly good, and we speeded north through Karakalpakstan (an autonomous republic within Uzbekistan that translates literally as ‘the land of the black hats’), through a flat landscape of cotton fields, reed beds and poplars yellowing with the arrival of autumn. The driver put his foot down and it took just a little over two hours to arrive at the erstwhile port.

In Moynaq, the scene from the ‘shore’ was both poignant and surreal: scrubby vegetation, sand and rotting boat hulks as far as the eye could see, everything shimmering slightly in a heat haze – the unwordly setting for a Sergio Leone Western that would never be made. My journal records it as ‘a sort of post-apolcayptic Wells-next-the-Sea where the tide never comes in’, and that seems reasonable enough. Away from the absent sea, the town itself, with its depressed air, street corner groups of listless youths and tangible taint of pollution, simply gave the impression that even with full employment, fishing and fresh water it would still be a dump. Now Moynaq was just a neglected and forgotten backwater… without the water.

(For another tale about another former Soviet fishing port now fallen on hard times you can read this about Balykchy, a threadbare port on Kyrgyzstan’s Lake Issyk-Kul.)

Nukus, where I had based myself for the dash to the rusting Aral fleet, was marginally better, although it had none of the Silk Road allure of other cities in Uzbekistan like Bokhara, Samarkand and Khiva, which despite heavy-handed reconstruction still hold  romantic appeal. Oddly enough, what Nukus does have is an incredible art collection. The Karakalpak Museum of Arts has a fantastic display of modernist work from the 1920s and 1930s that was collected by the artist Igor Savitsky (1915-84) and safely squirrelled away here in this distant corner of the former USSR. Here, far from Moscow, supposedly counter-revolutionary work such as that of the Russian avant garde managed not only to survive but also to go on display alongside ‘approved’ works of Soviet realism. There are even some who say that, in terms of Russian and Soviet art, the Nukus gallery is second only to the far more famous collection in St Petersburg’s Hermitage.

6 Responses to Ghosts of the Aral Sea