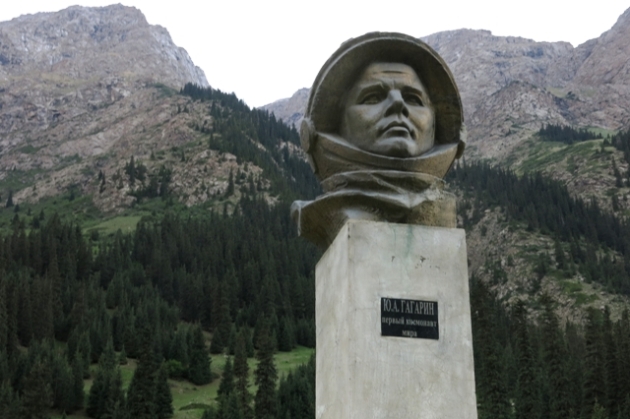 When Soviet cosmonaut Yuri Gagarin returned from the first successful manned space flight in 1961 he took a well-deserved holiday. We can only assume that this took place after a considerable debriefing by the Soviet military – it was, after all, a highly significant achievement and overnight he found himself to be the most famous living Russian after Nikita Khrushchev. The place he chose for his vacation – or rather, was chosen for him – was close to a large alpine lake in what was then the Kyrgyz SSR in Central Asia. This was a forbidden zone at the time and so safely well away from the prying eyes of Western journalists.

Tamga is a small, dusty village close to the southern shore of Lake Issyl-Kul in what is now Kyrgyzstan. Tamga still has its sanatorium, formerly a Soviet military R&R facility, and it was here that Gagarin stayed for a while, strolling the pine-shaded paths, bathing in the lake perhaps, no doubt eating shashlyk and contemplating his short but epoch-making sojourn in space. The camp is still popular with visiting Russians in high summer. While not deliberately nostalgic there is plenty to remind of its Soviet past – statues of military heroes tucked away between the conifers and stirring murals of proletarian power in the Soviet realist style. There is nothing to record Gagarin’s time here, no plaque or monument, but head a dozen or so kilometres up the neighbouring Barskoon Valley, and you will find a bust of the world’s first space traveller on a plinth. It stands beneath a lofty waterfall and Gagarin, of course, is depicted wearing a space helmet. On the road nearby stands another rather more colourful memorial to the cosmonaut, although damaged around the time of Kyrgyzstan’s independence in 1991 it has since been repaired. Although he belongs to another era, and another country, Gagarin remains a hero to many.

Hidden places, secret histories and unsung geography from the east of England and beyond
View all posts by East of Elveden →
This entry was posted in Asia, Central Asia, Travel and tagged Barskoon Valley, Kyrgyzstan, Soviet Union, Tamga, Yuri Gagarin. Bookmark the permalink.