To reach Another Place you have to start in Liverpool. At least that is what we did, taking a Crosby-bound number 53 bus from the city’s Queen Square terminus. Leaving the Victorian magnificence of the city centre behind, the route leads through the edgelands of north Liverpool, in sight of huge abandoned red-brick warehouses that fringe the wide silver Mersey below. Away from the revitalised city centre and the heritage revamping of Albert Dock, this is a zone of substandard housing and broken dreams; a place where most of the pubs are boarded up and semi-ruined now that the dockers who once would have drank in them no longer have wage packets to fritter. The whole area seems partly abandoned to buddleia and the memory of better days although, here and there, like red-brick phoenixes, are signs of identikit housing development: new-build semi-detached homes with small gardens and big aspirations.

Things seem to degenerate at the southern fringe of Bootle where the principal pub lacks not only clientele but also a roof. Narrow Victorian terrace streets slope away from the main road, their grim countenance softened by the names of flowers: Daisy Street, Woodbine Street, Harebell Street, and even a Pansy Street, which is perhaps a problematic address for a burly Scouse docker. After passing through Bootle, whose main centre of social interaction appears to be a bar located in the lower storey of a massive concrete complex that looks like it has been transported wholesale from Bratislava or New Belgrade, things start to look up, socio-economically speaking. Waterloo, where we alight next to the Merseyrail station seems altogether more prosperous, with a handful of smart cafes and a long marine parade of white-painted houses equipped with dormer windows to peer over the dunes to the beach and sea beyond.

At the end of South Road, the road gives way to a track past a man-made lake behind sand dunes. Oyster catchers, gulls and ducks have taken refuge here and have arranged themselves in tightly-packed groups to brace against the bitterly cold north-westerly wind blowing across the Irish Sea. Climbing slightly to reach the dunes and a coast path, the beach and sea are revealed. As are several of the one hundred life-sized cast iron sculptures that dot the foreshore here between Waterloo and Blundellsands, and which constitute the Antony Gormley landscape installation that is Another Place (although here they are more prosaically referred to as simply ‘The Iron Men’). It is a bright, if brutally windy, afternoon and there a few people about, strolling on the beach, walking their dogs, weaving nonchalantly between the iron men that punctuate the beach like sentinels.

The Gormley figures (modelled on the artist himself) stretch as far as the eye can see, each one staring out to sea isolated from the others: a statement on the human condition that refutes the John Donne position that ‘no man is an island’. Here, it would appear, every man is. The beauty of the figures is that, seen from afar, it is sometimes hard to distinguish those which are iron from those which are human. Covered and uncovered by each successive tide, the installation clearly points towards the relationship that exists between man and nature. Perhaps, silhouetted against the backdrop of Liverpool Dock’s cranes, it also alludes to the historical connection that links man and the seafaring trade in these parts? 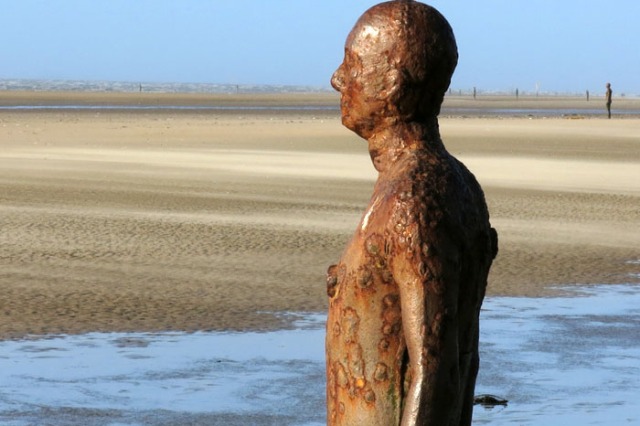 Hidden places, secret histories and unsung geography from the east of England and beyond
View all posts by East of Elveden →
This entry was posted in Cities, History, Northern England and tagged Another Place, Antony Gormley, art, Crosby, Irish Sea, Liverpool, sculpture, urban fringe. Bookmark the permalink.

11 Responses to Another Place