Space is the Place – Shakespeare and Sun Ra

Still reeling from the solar onslaught of the Sun Ra Arkestra the previous night we travelled yesterday to Great Yarmouth to see The Tempest at the town’s Hippodrome Theatre. The Sun Ra Arkestra fronted by nonagenarian alto-sax maestro Marshall Allen had done what they always did: channel the Saturnian spirit of their erstwhile and now-deceased leader Sun Ra and perform their joyful big band space-jazz to an appreciative audience for nigh on two hours. As the song goes, Space IS the place, and the place in this instance had been Norwich’s Open, a venue fashioned from the  brick and mortar of late capitalism – originally a  Georgian building that had started life as  a wine merchants before its vaults were re-purposed for the storage of bullion by the Gurney family. Merging with Barclays Bank in 1896 and soon outgrowing its original premises, a new building was constructed in 1926 with a large hall, extensive vaults and what was reputed to be the longest banking counter in the country. Later in life it went on to become the regional headquarters of Barclays Bank but now the clink of wine bottles and kerching of cash registers were nothing more than silent ghosts that observed on the sidelines as the Arkestra’s music swirled unfettered to the ceiling in this neoclassical void. A quotidian space formerly dedicated to the exchange of capital now given over to brave sonic venturing seemed like the best of outcomes, and the Sun Ra Arkestra quickly made it their own, filling the cavernous space with a joyful stellar noise and a powerful, if playful, presence. 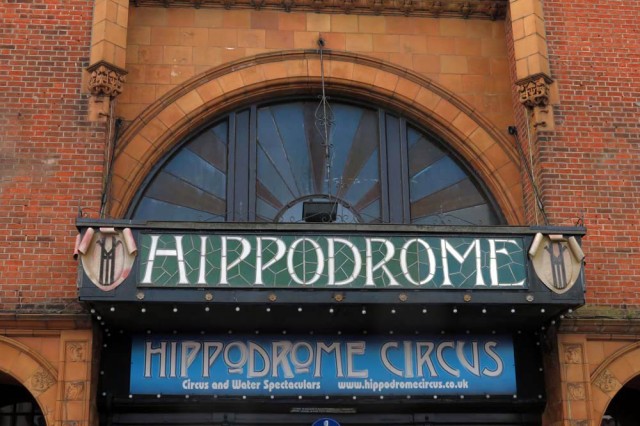 The Tempest took place in another very singular space: the wonderful Hippodrome on Great Yarmouth’s seafront, the only surviving purpose-built circus venue in the country. Built in 1903 by the great circus showman George Gilbert the building once faced directly onto the seafront across a square but now huddles behind the garish pink bulk of the Flamingo amusement arcade, a gaudy slice of Las Vegas tat transported to the Norfolk coast. Slip into the narrow street behind though and the gorgeous facade of the Hippodrome can be seen in its full glory, with Art Deco lettering and charming panels around the door, its towers peeping above the pink nonsense of the Flamingo to peak at the beach and the North Sea beyond.  This  was, and still is, a grand and stylish place: a theatre of dreams, a venue fit for the likes of Houdini and Chaplin who both performed here in the Hippodrome’s heyday.

If the exterior seems full of promise, the interior is even more beguiling: all dark velvet and chocolate brown, and a warm, well-used ambience that has left a rich patina on the fabric of the place. The seating is snug and steeply tiered; its darkly lit corridors lined with old posters and portraits of clowns and past performers, most notably Houdini (where better than Great Yarmouth to demonstrate the art of escapology?). There is even a poster of Houdini in the gents and, while a male toilet in Great Yarmouth is probably not normally the wisest place to take out a camera, my fellow micturators seemed to understand my photographic purpose. 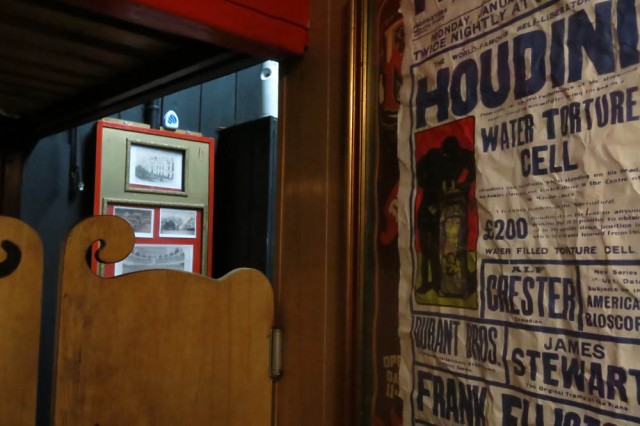 Theatre in the round; theatre in the wet: the Hippodrome might have been made for The Tempest; or, given a bit of temporal elasticity that could anticipate three hundred years into the future, The Tempest for the Hippodrome. The production, directed by William Galinsky, Artistic Director of the Norfolk & Norwich Festival, is a hugely inventive, almost psychedelic, affair that makes full use of the circus’s horizontal and vertical space and central water pool. For two hours we were mentally transported to Shakespeare’s island zone by means of brilliant storytelling, excellent acting and inspired direction, and, in keeping with this circus venue,  the acrobatic shenanigans of the Lost in Translation Circus.

Shakespeare is reliably universal of course, but did I detect a whiff of Tarkovsky (Solaris, Stalker) in there? A hint too of Samuel Beckett?  Of course, we each bring our own cultural references to bear. Today, yesterday’s performance seems almost dreamlike – a short-lived transportation from reality in which both the drama and the unique properties of the venue itself had an equal part to play. As Prospero remarks:

We are such stuff
As dreams are made on; and our little life
Is rounded with a sleep. 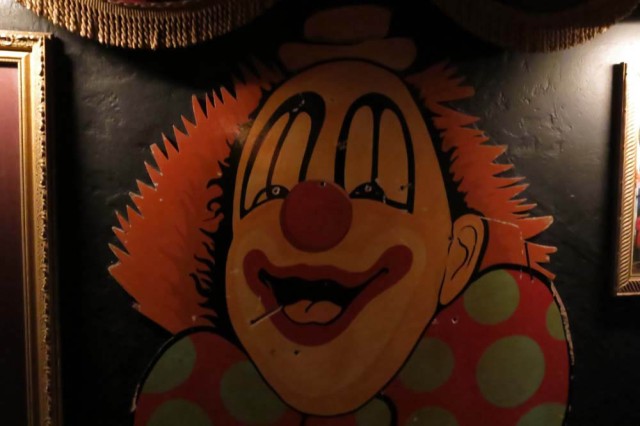 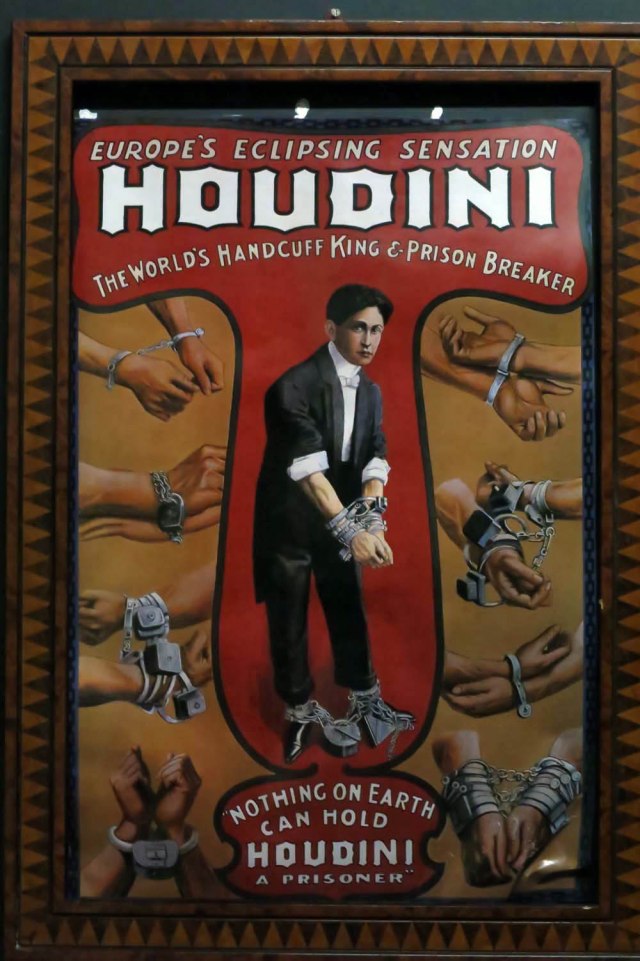 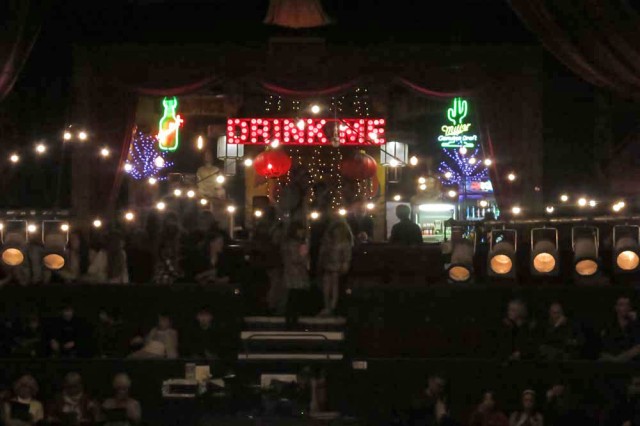 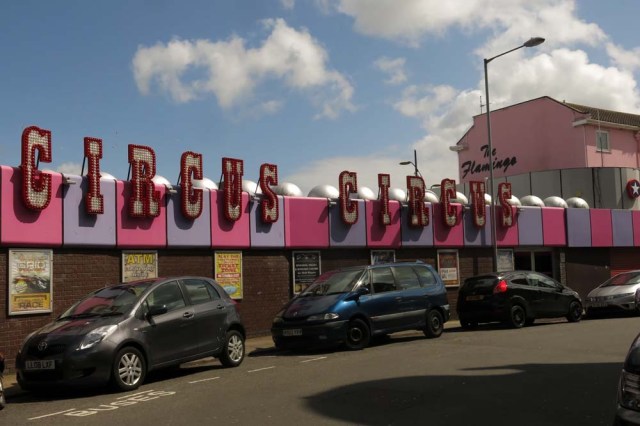 Hidden places, secret histories and unsung geography from the east of England and beyond
View all posts by East of Elveden →
This entry was posted in Literature, music, Norfolk, Uncategorized and tagged Great Yarmouth, Hippodrome, Norfolk and Norwich festival, Norwich, psychogeography, Shakespeare, Sun Ra Arkestra, The Tempest. Bookmark the permalink.

5 Responses to Space is the Place – Shakespeare and Sun Ra