Beneath a Concrete Sky – to Gravelly Hill Interchange by canal

Which river was it? Two. More or

The idea was to follow the Birmingham canal system north to Spaghetti Junction. I had already traversed the city by means of the Grand Union Canal a couple of years earlier, following the canal path west to arrive at the meeting of the waters at Gas Street Basin. That time I had turned left at Aston Junction but I knew that returning to that same point it would be possible to follow the Birmingham & Fazeley Canal north to reach Salford Junction directly beneath the Gravelly Hill Interchange.

Accompanying me on this venture was my friend Nigel Roberts, a fellow Bradt author devoted to Belarus and Blues (Birmingham City FC) in equal measure, who gamely agreed to come along despite our planned route veering close enough to Aston Villa’s turf to risk bringing him out in hives.

We rendezvoused in the gleaming concourse of New Street Station before making our way to Gas Street Basin by way of Victoria Square with its Queen Vic and Iron:Man  statues. A notice on the ever-present temporary fencing that characterises Paradise Circus gave notice that Antony Gormley’s  Iron:Man was soon to be moved to a new home. How, I wondered, might this effect the city’s sacred geometry, its unchartered leys that converged at Victoria Square? But Birmingham (motto: ‘Forward’) was always a city that messed with its past, forever rearranging the deckchairs, refurbishing the urban fabric, reinventing the wheel and then re-forging it by means of a Brummagem hammer. It always seemed a place where time not so much stood still as had a frequent lie-down, a place that lump-hammered the past into something that never quite made it to the future.

After a swift half-pint and perusal of the map at the Malt House pub opposite the geographically incongruous Sealife Centre we set off along the Birmingham & Fazeley branch towards Aston Junction. The day is atypically glorious, warm, blue-skied – peak May, the time of year you might happily be time-locked in were it at all possible. Cow parsley froths alongside the canal path, complimenting the blossoming hawthorn. Oxlips, red campion and broom compete for attention with the lurid graffiti that seems to embellish almost any available wall space. Above a lock, daubed high on a factory wall, eponymous Roof Top Vandals have left their mark in neat, bold lettering – a noteworthy combination of art and athleticism. Passing beneath the bridge that feeds railway lines into Snow Hill Station, the shimmering reflected light from the water dances like an electrocardiograph on the concrete above. 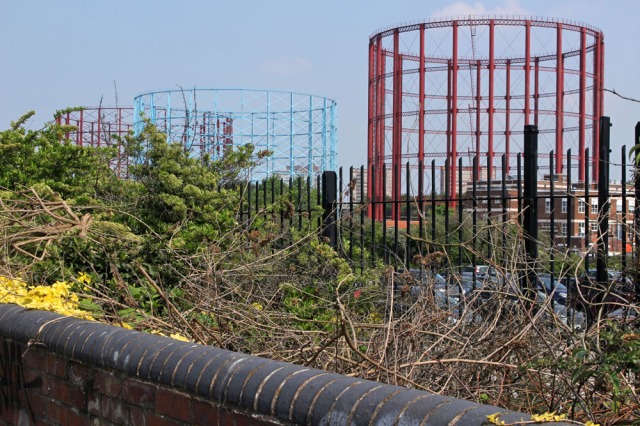 Approaching Aston, we pass the red and blue holders of the Saltley Gas Works, scene of the Battle of Saltley Gate some 46 years earlier when the fuel storage depot was mass picketed during a national miners’ strike.

A little further on, we become aware of a familiar figure atop a building – Britannia, complete with trident, excised from the back of a fifty pence piece, supersized and raised to roof level. It seems churlish not to investigate. We detour from the canal to seek out the building and head for the Lichfield Road in the wake of two teenage girls who swig beer from cans and swap yarns in rich Brummo-Caribbean argot. It is, as we thought, a pub; no longer operating as The Britannia but as The Aston Cafe. We are now perilously close to Villa Park, or Vile Park as my companion prefers to call it. It does not bother me either way – I am agnostic in such matters – but Nigel has started to sense that he is well behind enemy lines.

Returning to the canal to press on north, the Gravelly Hill Interchange aka Spaghetti Junction is already clearly visible ahead. The last house before the tangle of overlapping roadways takes over has iron railings decked in Union Jack flags – patriotism doing battle with traffic pollution. Just beyond, a defiant stand of purple lupins, garden escapes gone feral, announces our arrival at Salford Junction. Here we detour left for a short distance along the Tame Valley Canal, the curving multi-carriageway of the M6 immediately above us, articulated lorries flashing by half-seen above the barriers as they career along in compulsive centripetal motion. Above, spanning the roadways, blue signs point the way to London (M1) and The North (M6), while beside the water a navigational signpost for boats shows the various routes out of here – west to Tipton in the Black Country, north to Tamworth in north Warwickshire, back to the City Centre and Gas Street Basin (3½ miles) from whence we have come. But there are no boats today: the troubled pea-green waters beneath the Gravelly Hill Interchange fail to match most people’s criteria of what constitutes an ideal boating holiday. 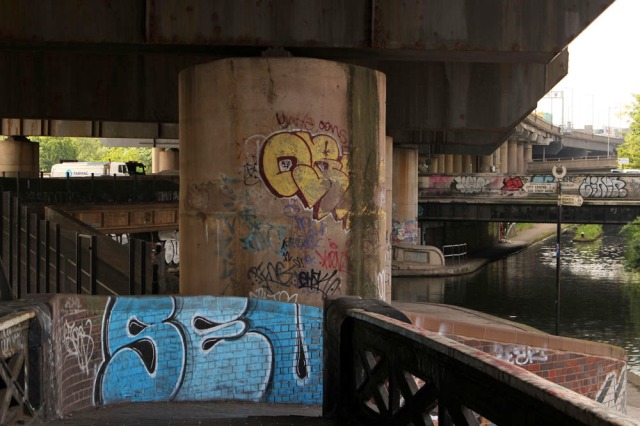 Huge concrete pillars support the roads overhead – 559 in total if you were foolhardy enough to count them. The pillars bring to mind Pharaonic temples in Upper Egypt – Luxor, Karnak – although hieroglyphs and carved lotus capitals are noticeably absent. But this whole chaotic enclave of concrete, water and channelled momentum is an unintentional temple of sorts – a nexus of late capitalism; a dinosaur footprint of transport and industry, an entropic sump. The water beneath, largely deprived of direct sunlight, is an opaque soup that looks incapable of supporting anything other than menace and monsters but here and there the light sneaks in to highlight graffiti, reflect on the water and cast shapes on the wall that mutate with the sun’s arc: accidental light sculpture, the oeuvre of James Turrell; found land art.

Locked between the various roadways, the trees and bushes of a green island rise defiantly within its looping concrete confines. It is home, no doubt, to all manner of wildlife – birds, pioneering cats… foxes. A Ballardian realm of preposterous nightmares and Sci-fi imaginings, there are probably parts of the Amazon rainforest that are better explored than this singular non-place. 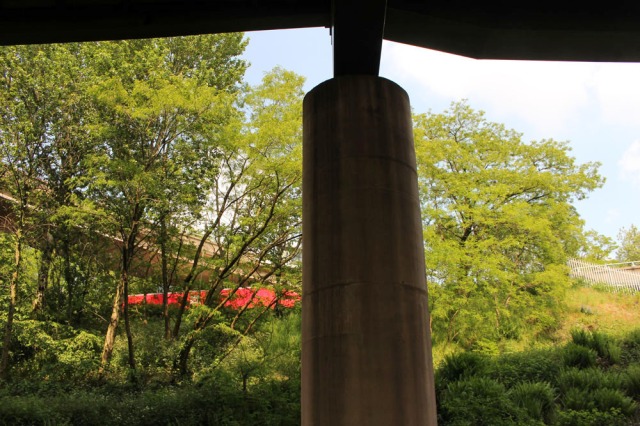 Satiated with the chiaroscuro experience of this interchange underworld, we return to Salford Junction and take the Grand Union Canal south through Nechells to return to the centre via a route best described as elliptical. We pass the vast entertainment complex of Star City, another latter-day temple to mammon; then an enormous recycling plant that has a conveyor belt receiving the load from a Sisyphean procession of tipper trucks, each crushed metal parcel crashing onto the hill-high mound with a shrill clatter. In uncanny juxtaposition to this unholy clamour, set back from the water is a small pond with reeds, yellow iris, water violet and water lilies – a Monet garden awaiting its artist. But for the deafening backdrop, this might be a scene in leafy Warwickshire. Indeed this whole stretch of canal, just a few minutes’ walk from Spaghetti Junction, has a disconcertingly rural feel to it. What is more, it seems almost completely deserted of people. 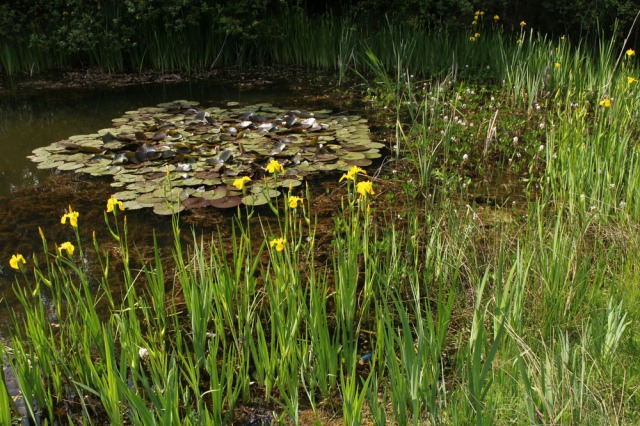 Reaching Garrison Lane in Bordesley we make another brief detour so that Nigel can show me the location of The Garrison, the pub whose fictional 1920s counterpart is centrepiece to the Peaky Blinders television series. There’s not a peaked cap or Shelby brother to be seen but it offers an opportunity for Nigel to fill his lungs with the right sort of air – St Andrews, Birmingham City’s home ground is only a little way up the hill.

Approaching Digbeth, we finally come upon the elusive River Rea – a shallow, sluggish channel beneath the canal viaduct. One of Birmingham’s two rivers, the other being the River Tame that it merges with close to Gravelly Hill Interchange, the Rea (pronounced ‘Ray’) spends much of its course through the city below ground out of sight. As the poet Roy Fisher claims in Birmingham River, the Rea does little to draw attention to itself: a ‘petty river’ without memory seems about right.

a slow, petty river with no memory

and misspelt at that.