There are places that stay in the mind long after visiting. Places that haunt the mind’s memory cache to prevail even years after having set foot there. Such places might be mountains, or rivers, or stretches of coastline; or even villages that charm and bejewel the bedrock of a singular landscape. Usually though, it is a combination of factors that constitutes the essence of such places – earth, sky, water, topography, the patina of a human occupation that beautifies rather than despoils. One such place is Lake Song-Köl in central Kyrgyzstan, the poster girl of a country that has occasionally, and not unreasonably, been described as the most beautiful in the world. 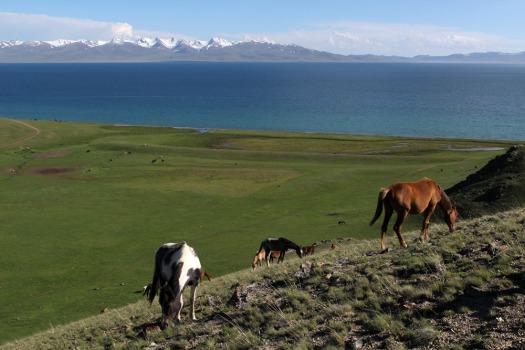 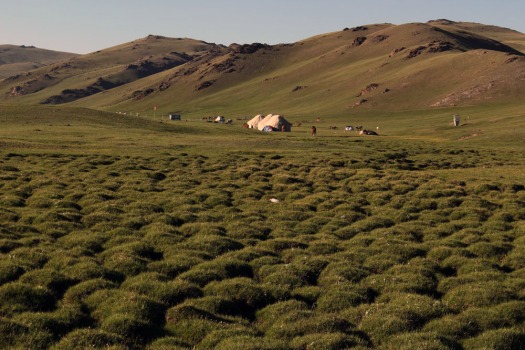 It had been a long time – twelve years in fact – since I had last visited. My assumption was that it hadn’t changed much in the interim. I was right – the landscape was as I remembered it, almost exactly. If anything, it was I who had changed: a dozen winters of freeze and thaw had affected me more profoundly than it had the pasture of the lake’s hinterland, the ever-renewing grazing pasture that justified its seasonal occupation.

There are several ways to approach the lake, set high at over 3,000 metres in Naryn province in what is more or less the dead centre of Kyrgyzstan. We drove up from the east, through stark, tightly folded valleys and arid badlands, until the lake finally revealed itself as a blue sliver beyond meadows grazed by yak herds.

The yurt camp where we stayed seemed familiar, although they all tend to look much the same – a cluster of yurts, an isolated toilet cubicle, a hitching place for horses. For all I knew this may well have been where I had stayed before. Its location was certainly very similar: up along the lake’s north-eastern shore away from the main concentration of yurts close to the approach road. The camp was overseen by a cheerful baboushka*, who exercised gentle rule over her son, daughter and daughter-in-law, and fussed over her laughing grandchildren who looked so at home here on the jailoo* that you might imagined that this was the only world they ever knew, although outside the summer months they would probably be town-dwellers like the rest of us. As ever in Kyrgyzstan, we were welcomed with tea and bread… and jam, and honey, boiled sweets and biscuits – just a token snack before lunch – plov*, salad, more chai – which would be ready in an hour. There was just time for a quick walk up the broad, green valley where a drift of chestnut horses were grazing the thin grass of its slopes. 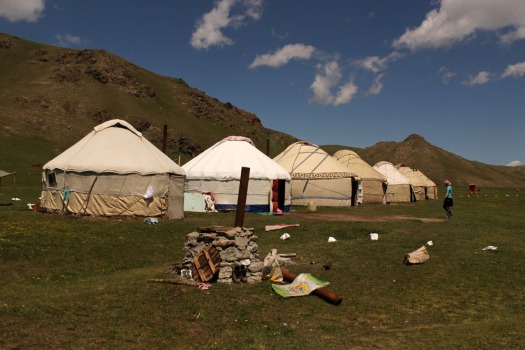 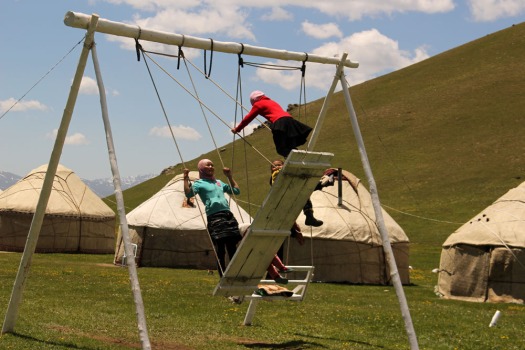 After lunch, we went horse-riding with the baboushka’s son for the best part of three hours, two hours longer than my habitually non-equestrian body was comfortable with. Later, stiff and sore, and thankful to return to bipedal ways, we hiked up above the valley before descending down to the lake water where horses were lined up drinking. A small marshy area close to the shore revealed a solitary redshank and a grey wagtail. We had hoped for birds of prey but, other than a single circling buzzard, raptors were shy in revealing themselves. Wheatears, on the other hand, seemed to be almost everywhere, flashing white as they cocked their tails flitting from rock to rock. And skylarks too, an improbable density of them jangling the sky – the birds had flown up in such abundance from unseen nests whilst on horseback earlier I had been concerned that we might trample eggs beneath our inexpertly guided hooves. 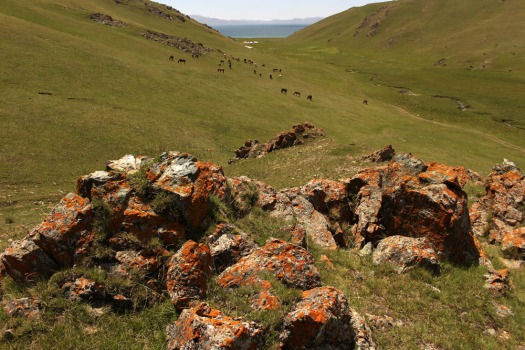 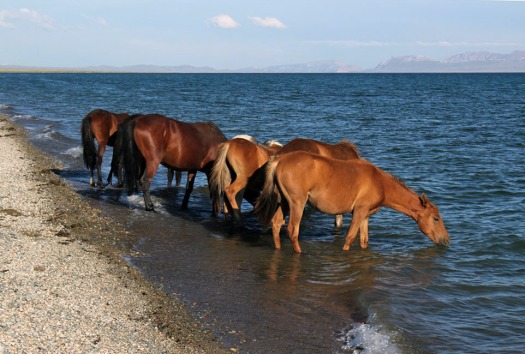 After dinner – fish from the lake fried in batter, more bread, more chai – another brief walk to watch the full moon rise. A band of pink cloud humbugged the darkening sky like a vein of quartz in rock as definition blurred and colour drained from the land. Above us, hovering low in the sky, as if serenading – or perhaps, scolding – the rising orb, a single skylark clattered its song in the ebbing light.

*plov – Central Asian dish made with mutton and rice