Earlier this week we walked from Heacham to Old Hunstanton along the seawall. To say that it was a bit foggy would be an understatement as the whole of northwest Norfolk lay shivering under a thick blanket of dense fog – a white-out, or rather ‘grey-out’, that rendered visibility poor in the extreme.

We made our way through Heacham village, past gingerbread carstone cottages and then holiday bungalows and caravan sites before arriving at North Beach, where the previous night’s freeze had created thin blades on the stems and leaves of shoreline plants and shrubs.

A few distant ghostly figures could be seen out on the wall, walking dogs or just taking exercise. The Wash that lay ahead was an unappetising grey soup that disappeared from view not far beyond the groynes that ran into it. On the far shore lay Lincolnshire; today, it may as well have been Narnia. It is said that on a clear day it is sometimes possible to make out Boston Stump (the soaring tower of Boston’s St Botoph’s church) on the distant shore. Not so today. The tide was going out, its recent turning delineated by a line of seaweed, broken shells and energy drink cans. A washed-up sprig of plastic holly added a timely if lacklustre reminder of the coming festive season.

Approaching Hunstanton, the resort slowly came into focus as the mist started to clear. Soon after, a hazy disc of sun shone through and fragments of blue sky began to piece together overhead. By the time we reached Old Hunstanton the transformation was complete – perfect light to appreciate the banded cliffs that rise here. Some unknown hand had created a piece of citizen landscape art on the beach – a collection of painstakingly assembled cairns of red and white chalk that echoed the cliffs of the backdrop. On the shoreline, oystercatchers perched companionably on seaweed-covered rocks while sanderlings scurried like clockwork toys and turnstones did exactly what their name suggests. A scene to savour, albeit briefly – by the time we turned around to walk back into town fog was already starting to descend once more.

Beneath the spectacular white and red chalk cliffs of Old Hunstanton in northwest Norfolk lie the sorry remains of what was once a working boat, the Steam Trawler Sheraton. Although she started life in 1907 as a Grimsby fishing trawer, and would later serve a a patrol boat and mine sweeper during World War II,  the Sheraton suffered the ignominy of serving as a target practice vessel for the RAF in 1946. In 1947, a gale caused the boat to break free of her mooring on the Lincolnshire side of the Wash and the Sheraton eventually washed up on Old Hunstanton beach.  Much of her bulk and fixtures were salvaged and now only the bottom of her hull remains, reduced to just a barnacle-covered skeleton of ribs and braces after more than half a century’s scourging by the tide. 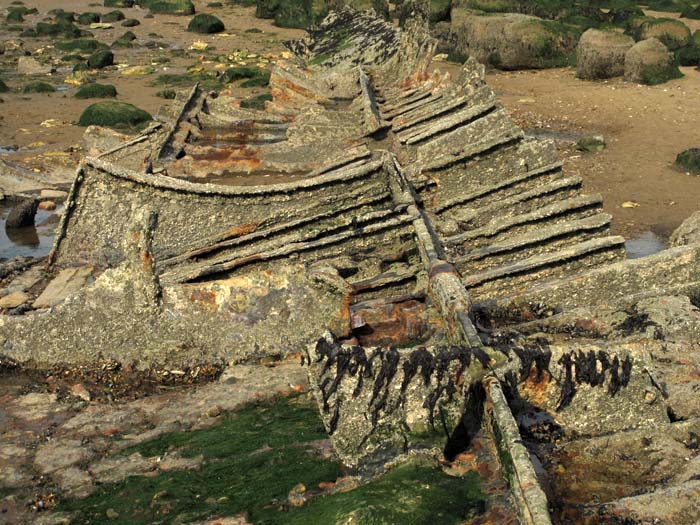 The coast at this spot is known as St Edmund’s Point, a name that references the arrival of St Edmund who is said to have been shipwrecked here in AD855. The 14-year-old boy, who would be crowned King of East Anglia the following year, would go on to become a religious cult hero and England’s first patron saint after his matrydom at the hands of Danes in 870. Later, in the 13th century, the monks of Bury St Edmunds would build a chapel on the cliffs above the spot where Edmund was reputed to have landed in gratitude for his safe deliverence. The ruins of the chapel lie close to a white early 19th-century lighthouse, now a private residence, whose light was extinguished at the outbreak of World War I never to be rekindled.

The beach at Hunstanton is one of the few places in Britain where the foreshore is privately owned. The Le Strange family, who have been lords of the manor here since shortly after the Norman Conquest, have in their possession a charter that states that as well as the beach itself they own ‘everything in the sea as far as a man riding a horse can throw a javelin from the low-tide mark’. The hereditary title of Lord High Admiral of the Wash is also retained by the family. So, the skeletal remains of the Sheraton wreck belong, technically at least, to the Le Strange estate, as do the picturesque seaweed-covered rocks that set off any decent photograph of the cliffs. If St Edmund had pitched up here a couple of centuries later than he did perhaps he would have become the property of the Le Strange estate too? 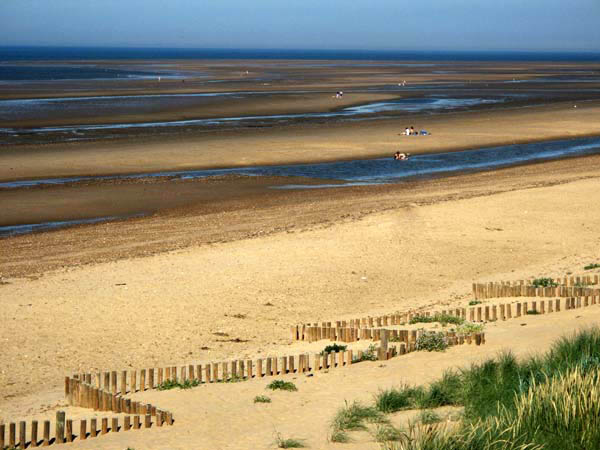 Late July. It is the hottest day of the year and recent deluges are quickly forgotten as the earth bakes beneath a cloudless sky. North Norfolk’s pristine air glows with the sharp blue light that seems only to be found close to the coast – a light that bears the reflected promise of the sea just beyond. The notion is to celebrate my birthday with a circular walk that takes in the curve of the county at its northwest extremity: that charmed stretch of sand, marsh and hinterland chalk that curves west to south between Holme-next-the-Sea and Hunstanton.

I set out from Old Hunstanton at St Mary’s Church on the fringe of the Le Strange estate, a curious feudal relic of Norman patronage that historically even has possession over the seashore as far as Holme-next-the-Sea, the incumbent bearing the complimentary title of ‘Lord High Admiral of the Wash’ and the limit of the estate boundary traditionally measured by a spear thrown into the Wash from horseback at low tide.  I circumnavigate the dense woodland of Hunstanton Park before heading south along a track marked by a sign that calls it Lovers’ Lane. But there are no lovers today, just me, and it is not really a lane as we tend to know them either, more a greenway enclosed by hedges and tall stands of nettles, one of the less pleasant by-products (along with more than usually plentiful mosquitoes) of this unseasonably wet summer. 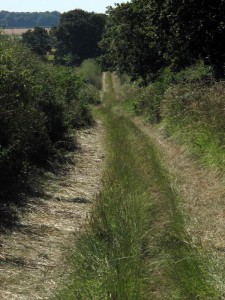 A mile or so later, following a short interlude along tractor-rutted farm-tracks, I climb gently up to a point where I can see the evocative ruin of St Andrew’s Chapel across the fields. Dropping down again, I soon reach the eastern end of Ringstead Downs. A large chalk-built barn and stark white cliff face serve as a reminder that this corner of the county is where the underlying chalk comes right to the surface. This, terminating in the striated chalk and carstone cliffs of Old Hunstanton, is the northern end of a seam of chalk that cuts diagonally southwest to northeast through southern England – the geological marker of the miscellany of paths that once constituted the Icknield Way. Chalk generally brings a gift of rich flora and Ringstead Downs, a shallow valley with the scarp slope on its northern side, does not disappoint. Thyme, eyebright, vervain, centaury and the charmingly named squinancywort are all to be found here: jewel-like miniatures that embroider the grass with pointillist spikes of colour. It’s humid and warm – a chalk valley microclimate; microscopic storm flies find their way through hair to scalp. There’s no breeze and little extraneous noise other than the summery coo of pigeons in the trees and the well-nourished buzz of satiated bees. Butterflies sip nectar; a buzzard swoops before flying off into the woods that flank the down’s eastern limit; a group of peahens – hardly native – screech alarmingly as they waddle for cover in the trees. 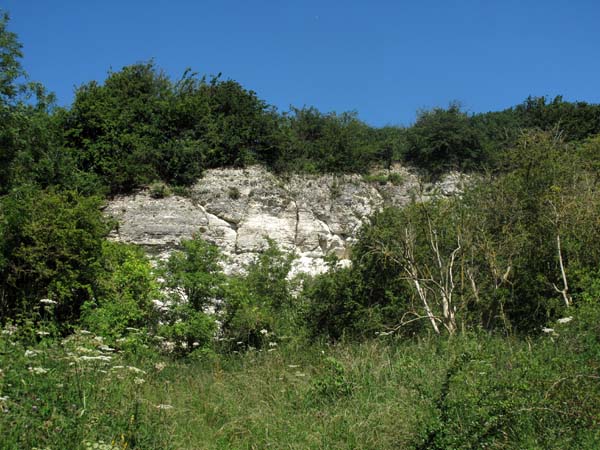 Ringstead village, a roadside strip of neat carstone and chalk cottages, is almost as silent apart from a few muffled voices emanating from the pub garden and the sudden scream of a dozen swifts plundering the sky overhead. From here, it is a plod along quiet country roads to reach the coast. Barely a car passes, just a man on a bicycle with panniers who bids me ‘Good afternoon’. Afternoon? Already? The road runs mostly parallel to the coastline, the sea out of sight but with long views over the valley to the south with its harvested cornfields and sparse green hedgerows.

This corner of Norfolk flaunts its geology quietly but confidently: the gently contoured topography, the chalk and sandstone of village vernacular. There are more discrete clues to a glacial past too: just below the road lies Bluestone Farm, a name undoubtedly adopted because of the presence of glacial erratics (‘blue stones’) hereabouts – northern rocks carried here by ice and unceremoniously dumped like strangers in a strange land.

As the road climbs to its highest point – a lofty (for Norfolk) 50 metres – the coast comes abruptly  into sight: a blue salt-haze with a large wind farm on the horizon, turbines spinning slowly as if doing their bit to keep the world turning. Thornham village is but a short walk downhill. Once considered to be a ‘smuggling village’, the village is now largely a smart enclave of expensive 4x4s and wealthy folk ‘up from London’. Thornham is undeniably attractive: set just back from the coast, separated from it by bird-rich marshes, its brown carstone cottages look as if they are made from gingerbread, good enough to eat.

The coastal path crosses the marshes to reach a staithe before following the line of sea defences all the way west to Holme-next-the-Sea. At Thornham Staithe, and later at Holme, the busy car park exerts a curious gravitational effect that seems to prevent the majority of its visitors ever breaking much beyond its orbit: home, car, car park, beach, picnic, swim, car park, car, home. Nothing wrong with that of course, it allows the rest of us  to have the paths to ourselves most of the time. A boarded walkway leads over the top of the dunes to reach the beach at Holme-next-the-Sea, then briefly plummets through the deep shade of pines at the bird reserve before continuing between beach and marshes as the coast tips southwards towards Hunstanton. Pipits rise in alarm from the path in my wake; pyramidal orchids, slightly past their best, dot the sandy hollows in magenta clusters; yellow ragwort is everywhere. 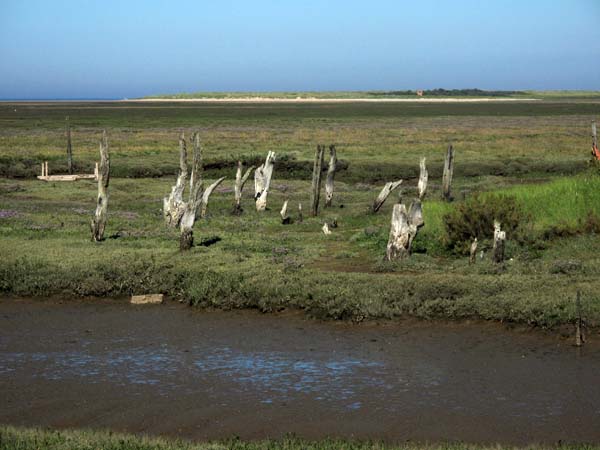 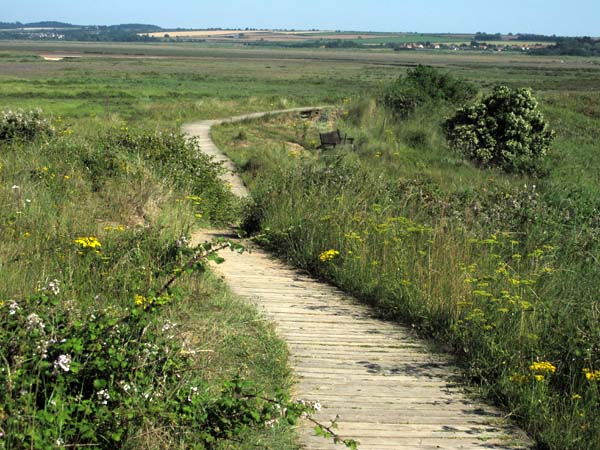 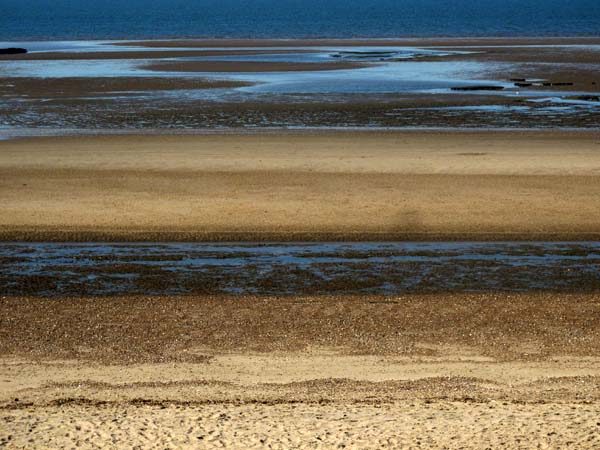 Approaching Old Hunstanton the coastal path follows the line of shingle between the dunes and a golf course. The buildings of Old Hunstanton eventually become distinguishable on the cliffs ahead.  Finally, beach huts in the dunes announce the outskirts of town, where a track leads up past the Le Strange Arms Hotel to the main coast road. My coastal circuit – less a circle, more a wobbly ellipse – is complete.