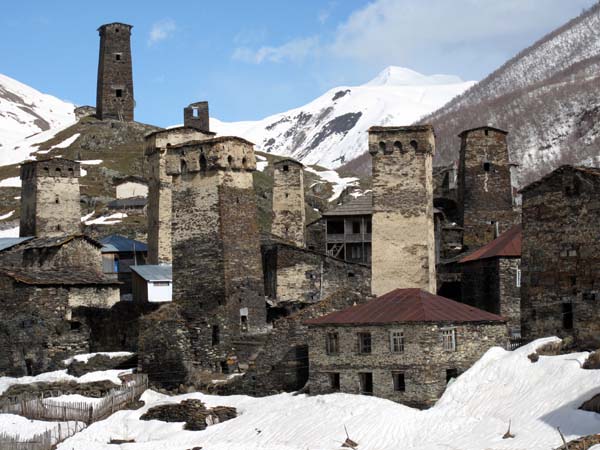 It all started more than 25 years ago when I bought a book called Architecture without Architects in a second-hand bookshop. The book, pithily subtitled A Short Introduction to Non-Pedigreed Architecture, and authored by Bernard Rudolfsky, came as a revelation, presenting all manner of strange and wonderful vernacular buildings from all over the globe.

The book was actually a follow up to an earlier exhibition of the same name at New York’s Museum of Modern Art. Within its pages were numerous black and white photographs of African mud huts, Galician stone granaries, Cappadocian cave dwellings and the tightly clustered dwellings of Italian hill towns. What struck me most though was
three grainy old photograph of titled: The fortified villages of Svaneti. Of all the fanciful structures depicted in the book, the buildings in these images looked the oddest, the most improbable of the lot – menacing stone skyscrapers set against a snow-covered mountainous backdrop. Accompanying the photos was a little text that explained that they
dated back to the 12th-century and were built and maintained by local families as defence against the ‘blood feuds and vendettas that raged unchecked’ in the region. It didn’t even say which country they were in, just ‘western Caucasus’. They were, I subsequently found out, in the Georgian SSSR of what was then still the Soviet Union. 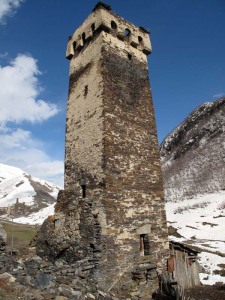 Almost two decades later I get to visit Georgia – following the breakup of the USSR such things have become altogether easier – but it was not until my third visit to the country that I finally managed to travel to Svaneti and see the towers for myself. Svaneti happens to be home to some of Europe’s highest villages, with permanent settlements where snow lingers late into May, but the region is better known for its unique ancient culture and for its somewhat sinister reputation. Even within Georgia, the Svan inhabitants of the valley are treated with suspicion as Svaneti is usually thought of as a backward, lawless region with a reputation for brigandage. This certainly used to be the case, and until a decade ago Svaneti was a risky place to visit with robberies at gunpoint not uncommon. Thanks to a big clean-up operation a few years ago – the Georgian government is keen to develop tourism – it is now pretty safe. 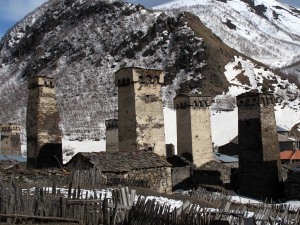 Visiting Svaneti  for the first time I realise that the place I saw in Rudolfsky’s book all those years ago was a collection of villages  called Ushguli, nestled beneath high Caucasus peaks and stretching high up a valley. At 2,200 metres altitude, Ushguli is probably the highest permanently inhabited settlement in Europe (although currently no-go Dagestan on the other side of the Caucasus range also has contenders to the title) but it is its magnificent medieval towers that make it truly extraordinary. Some have collapsed over the years but there still sufficient to present an imposing spectacle and render Ushguli’s towers a UNESCO World Heritage Site. 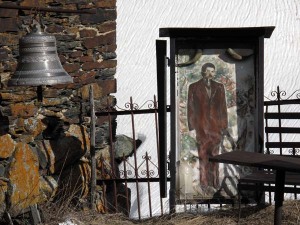 There has never been a better time to visit Svaneti, although things are changing fast – too fast for comfort perhaps. Following centuries of isolation – both the wheel and the internal combustion engine arrived here at roughly the same time during the 1930s – Svan villagers are starting to leave their high valleys for an easier life in Tbilisi, the Georgian capital. The building of a new road will no doubt help accelerate this change and the days of unadulterated Svan culture may now be numbered. For the time being though, travelling there is still to take part in an adventure.

Bradt Travel Guides have a good guide to the country. Authored by Tim Burford and recently updated by yours truly for the 4th edition, it contains all that you need to know about Georgia – Svaneti and Ushguli included.

Hidden places, secret histories and unsung geography from the east of England and beyond
View all posts by East of Elveden →
This entry was posted in History, Travel and tagged architecture, Bradt, Caucasus, Georgia, Svaneti, towers, Ushguli. Bookmark the permalink.

3 Responses to Architecture without Architects